How Jessica got her look!

Even though I wrote the novel Who Censored Roger Rabbit? which introduced Jessica Rabbit, I'm a writer, not an artist.  I saw Jessica only in my imagination. I had never seen her for real, never drawn her.  Because that's a skill I don't have.  Luckily, Oscar-winning animator Richard Williams had that skill in abundance. He sat down with me and together we drew the Jessica which had previously existed only in my mind.  Dick exaggerated her proportions - the teeny tiny waist, large chest, larger bottom - so that other animators would know that she hadn't been rotoscoped.  That's a perfectly acceptable animation technique in which animators film a live action person and then draw over the photo.  That could not happen here.  There's no real person with Jessica's impossible proportions. Nobody we could possibly have filmed in live action and traced over.  Dick did a magnificent job bringing my wishful thought to life.  Jessica, as I saw her and as Dick drew her, is now regarded as one of the premiere sex symbols of all time.

Never give up!!!  My first book contract was with Doubleday.   Four science fiction books, any subject I wanted.   I wrote and published... 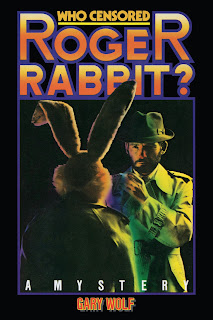